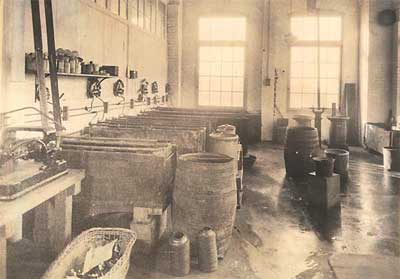 This old photograph was taken around 1925.

Back then we didn't do chromium plating yet, it had just come out. We did Copper, Nickel, Brass, Silver and Gold plating. In the foreground is a bench mounted DC generator powered by an overhead drivebelt. Next to it on the floor is a basket with lampshades in it and a work order. Also just to the right are two stacks of the same or related pieces. The plating tanks were made of wood, and most likely lined with Lead. Note the shelf above the first two tanks. It's a small supply of chemicals and test kits used by the workers to maintain the solutions. In the background is a polishing lathe used mostly for touch ups and burnishing, and was also driven by a overhead belt.

The place looked a like a mad scientist's laboratory. The rods and blocks mounted to the wall are busbars carrying the current to the rheostats, which regulated the amount of electricity applied to the workpieces in the various baths. A small voltmeter mounted on the wall was the only instrumentation. Oak barrels for rinse tanks and porcelain crocks for acids were commonly used for small scale work by platers until the 1950's or 60's. It appears the photograph was taken at the end of the day or perhaps during a break, as the floor is wet, not just with water, but also acids, metal salts and cyanides too! Of course this was long before the concept of ecology and waste treatment. Back to full view.

Back to History Page